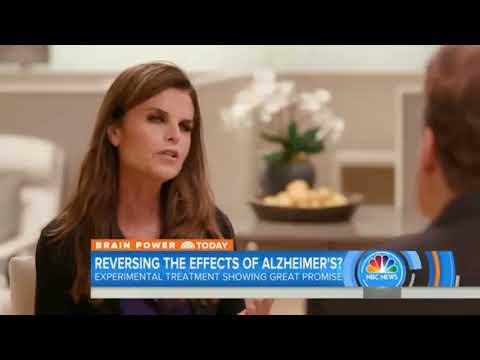 NBC special anchor Maria Shriver reports on The Bredesen Protocol in a 2016 edition of Brain Power TODAY.  The Bredesen Protocol continues to show signs of reversing Alzheimer’s symptoms.  California neurologist Dale Bredesen says the program is designed to fix imbalances in the body, but warns it’s not a cure.  As a result of this customized program, people are reversing their cognitive decline.

In her 40s, Deborah began to have memory problems and wasn’t able to recognize people’s faces.  She also carries the Alzheimer’s gene.  Due to The Bredesen Protocol, she has reversed her cognitive decline.  Deborah says she’s living proof this program works.

A study showed 9 out of 10 Alzheimer’s patients on The Bredesen Protocol improved their cognitive function.  Their symptoms began to reverse within 6 months.  Subsequently, some of the patients were able to return to work.

One study patient, a working physician, was diagnosed with early onset Alzheimer’s.  After a year on The Bredesen Protocol, his symptoms disappeared.  Moreover, his cognitive test scores are back to normal.

Doctors in the U.S. and other countries are receiving the training needed to administer The Bredesen Protocol.  Additionally, course details can be found by visiting The Institute for Functional Medicine.