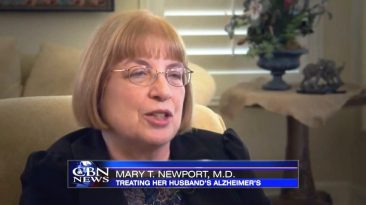 Coconut Oil As An Alzheimer’s Treatment Coconut oil is being used as part of an Alzheimer’s treatment.  Steve Newport’s Alzheimer’s disease slowed considerably and some symptoms even reversed.  This was due to an unlikely treatment prescribed by his wife, Dr. Mary Newport.  Steve failed the Alzheimer’s clock test, drawing only a few circles and numbers randomly on the paper.  At that point, he was on the verge of severe Alzheimer’s.  Dr. Newport researched and found Alzheimer’s is a type of diabetes of the brain.  Actually, it’s a process that starts happening at least 10-20 years before ALZ symptoms appear.  In this case, insulin problems prevent...